With such a wide variety of new slot machines created by Microgaming each and every month it seemed inevitable that they would release a football themed slot to celebrate the 2014 World Cup, and that’s exactly what they’ve done. Football Star is the latest football-themed slot available at Microgaming casinos and joins previous popular football slots in their library of games such as World Cup Mania and Safari Soccer. 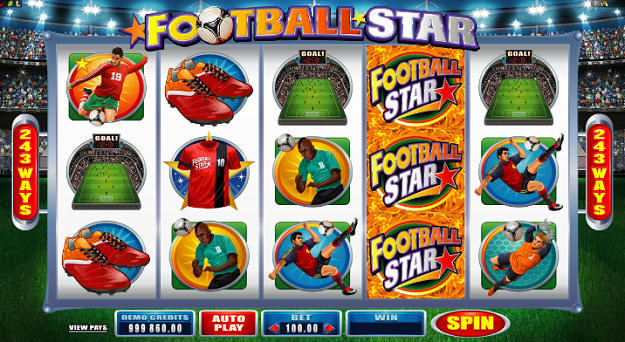 Football Star is displayed in the popular 5×3 format and is a 243-ways slot machine, meaning there are even more opportunities to land a big win. Coin sizes range from 0.01 to 0.50 and you can bet between 1 and 10 coins on each line, with Microgaming stating that the slot features a maximum win of £105,000 – which is very generous for such a standard slot game.

Sadly Football Star is not a ‘licensed’ slot machine therefore you won’t find your favorite players like Cristiano Ronaldo, Lionel Messi, or Wayne Rooney featured as symbols on the reels, instead it is basic animated symbols. The symbols you will find on the reels include a football pitch with a scoreboard saying 2-0, Football Star top, football boots, referee, the Football Star symbol (which is the games Wild), white football (which is the games Scatter), and a variety of players in different actions such as a goalkeeper diving to make a save, a defender heading the ball, player performing a bicycle kick, and player shooting. With so many symbols used fitting the football theme, there are no ‘playing card’ symbols used which are common in most other slots which is a lovely change. Add to this the background music which is a mix of a song and the fans chanting, and you get a great sense of the atmosphere at a football stadium.

As with most Microgaming slots, there are several exciting ways to score big in Football Star. To begin with it features collapsing reels which sees the symbols that land you a winning combination disappear to be replaced by new symbols, and hopefully leading to yet another win all for free. There is also a Stacked Wilds feature which sees reels 3, 4 and 5 covered in the Wild symbols with reel 3 containing a stack of 18 Wild’s, reel 4 containing a stack of 25 Wild’s, and reel 5 containing a stack of 3 Wild’s. This feature brings some very large wins which often repeat themselves delivering win after win. Another lovely bonus is the Striking Wild feature which sees a player kick a ball onto the screen and the center reel then turns Wild.