Cricket Star is a 5-reel, 243-pay line slot that was released by the gambling giant Microgaming just in time for the start of the 2015 ICC World Cup, hosted by Australia and New Zealand.

This classic, ‘all ways win’ slot features teams and symbols from the world of cricket’s most exciting tournament, and should help cricket fans to find something interesting to do to fill in those dull moments in a cricket match, which some might argue is the moment from when the first ball is bowled to the last! 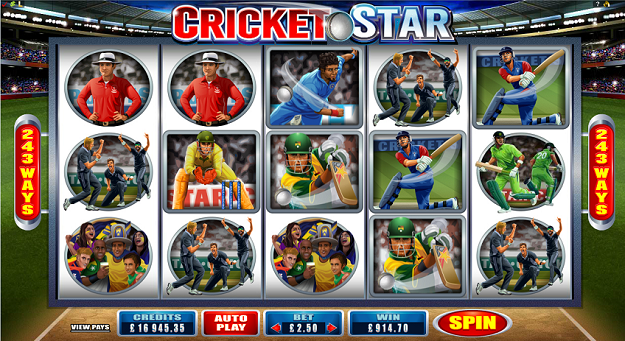 Cricket Star has a very generous 243 possible pay lines. This means that to secure a prize jackpot, you simply need to land a winning sequence of identical symbols across the reels at any position, one reel at a time. Your sequence of course must start with the left hand reel, and you can gain a win by landing a mere three identical symbols. Howzat?

All possible lines are in play at all times, and your bet per line is always multiplied by 50 as you have so many ways to win. Your lowest coin size is 0.01 and your biggest is 0.50. You can gamble between one and ten coins for any one spin, meaning the minimum bet is 0.50, and the maximum with all lines and coins in play is 250.00. The more coins you bet, the more you stand to win.

All the symbols in this game are graphics associated with the game of leather-on-willow, and all the players are wearing the colourful clothing of one-day cricket.

The crowd (who all seem to be supporting the hosts, Australia) are the lowest jackpot winners at 2x your stake per line. A batsman dealing with a full toss is the top prize-giver at 500x.

If you want to be a Cricket Star spinner, simply place your wager and hit the spin button.

Cricket Star Wild Symbol: There are more than 40 Cricket Star wild symbols on the reels, and they are stacked in threes on the central three reels to give you more chances of winning. The wild symbols substitute for all other symbols aside from the scatter symbol.

Free Spins Scatter Symbol: A dazzling white cricket ball is the scatter symbol in Cricket Star. Landing at least three anywhere on the reels wins you a cash jackpot and a number of free spins. You are awarded 15 free spins for three scatters, 20 for four and 25 for five.

Rolling Reels Feature: Every time you secure a win during normal play, the winning symbols disappear faster than the English Cricket team from a one-day tournament and new symbols cascade down to fill their places, possibly triggering new wins. If this happens during free spins, your second win has a 2x multiplier applied to it, followed by a 3x multiplier, and so on, all the way up to a maximum of 10x.

Wild Wickets Feature: Randomly during the game a wicket will rise up and cover the three central reels as they spin. A ball will be bowled to send one of the stumps flying, and the corresponding reel will turn completely wild.

Clearly, Cricket Star is not just a slot for cricket fans. The game is at the simpler end of the slots market, but certainly has enough features and bonus items to keep most slots fans interested. Slots that have 243 pay lines are always worth a spin as it’s easy to see when you’ve landed a winning combination.

Add on the rolling reels and wild wickets features, and you have a slot here that’s very likely to bowl most online slots fans completely over!