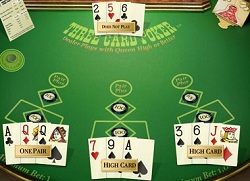 Many casino games have been around for centuries, but in recent decades, new favorites have emerged to give players new options for their gambling dollars. One of the most popular new games is Three Card Poker, a game that is simple to play but offers big payouts for players who get dealt the right hands. Real money online Three Card Poker is one of the most popular games at most online casinos, in large part because both the rules and strategy of the game are easy enough to learn in just a few minutes.

Three Card Poker is offered at most online casinos, though it is sometimes offered under alternative names for legal reasons. These games, with names like Tri-Card Poker, may also have some cosmetic differences from the Three Card Poker games we describe here. However, none of these changes affect the strategy or odds of the game.

The key thing to watch for when playing Three Card Poker online is the pay tables being used. Most casinos use the standard ante bonus pay table, but the PairPlus payouts can vary dramatically. Other than that, though, most online Three Card Poker games should play similarly.

How to Play Three Card Poker

Three Card Poker is really two games in one. When you play online Three Card Poker for money, you can choose to play either or both games. We’ll cover the two games separately, starting with the simpler of the two. Both games begin with each player receiving a three-card hand; the dealer will also get a hand. All hands are face down, though players may examine their own cards.

The PairPlus bet is often seen as a side bet; however, it’s actually a game that may be played even without making the ante bet. The PairPlus bet pays out if the three-card hand the player is dealt is strong enough. As the name of the bet implies, players need at least a pair in order to win. The best pay table commonly offered is as follows:

The ante bet is normally seen as the standard Three Card Poker bet, as most of the action at the table revolves around resolving it. The ante bet also allows players to incorporate some strategy, unlike the PairPlus bet, which is entirely based on luck.

After receiving and taking a look at their cards, all players who have made the ante bet now have a decision to make. Players can choose to fold – forfeiting their ante bet – or make a second play (or raise) bet of equal size if they wish to stay in the hand.

Once all players have chosen to play or fold, the dealer reveals his hand. The dealer must have at least a queen-high to qualify. If the dealer does not qualify, all players remaining in the hand win even money on their play bet, while all ante bets push.

In addition, there is an ante bonus that is paid on hands of a straight or stronger. This bonus should be paid whether the player wins or loses. The most common pay table for the ante bonus is as follows:

Keep in mind that neither the ante bonus nor PairPlus pay tables are set in stone, and both have several variations that can be seen at different casinos. When playing online Three Card Poker for real money, always check the pay table before playing if you want to be sure about the payouts for various hands.

If you’re going to play Three Card Poker online, it’s worth memorizing the very simple strategy required to get the most out of the game. First, let’s state the obvious: the PairPlus bet has no strategic element. You’re paid based on what you’re dealt, and you have no control over that, so that bet is entirely luck-based.

On the other hand, the ante bet does require you to make a decision on whether or not to play each hand. The optimal real money online Three Card Poker strategy is to play all hands of queen/six/four or better (including all pairs and better hands), and fold everything that’s worse. If even that feels like too much to memorize, you can simply copy the dealer’s strategy and play any queen-high hand; this will add a tiny bit to the house edge, but comes relatively close to the optimal strategy.

If you play in a real money Three Card Poker game using the ante bonus table we outlined above, the house edge is 3.37% with optimal strategy. As we said earlier, using a simpler “queen-high” strategy is almost as good, raising the house edge to just 3.45%. the house edge on the PairPlus bet can vary significantly depending on the pay table; the table we used in our example above is the best one you’ll find, and has a house edge of 2.32%. Another common pay table reduces the amount paid for a straight from 6-1 to 5-1, which raises the house edge to 5.57%.