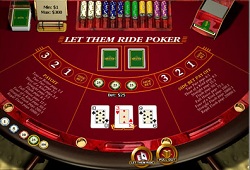 Let it Ride (also known as Let ‘Em Ride, or Let Them Ride) has become a popular casino table game due mostly to the fact that it allows the player to control how much money they want to wager during the course of a hand – an advantage you won’t find in any other popular casino game. This is offset somewhat due to the frustrating nature of the game; most hands are losers, with the player on average winning only one hand out of four. However, wins tend to be much bigger than losses, and having an exceptionally strong hand can mean you’ll win a prize worth thousands of times your original bet!

Let it Ride is a game of both luck and strategy, and having a complete understanding of how it works is critical if you want to get the best odds possible. Read on to learn everything you need to know about playing Let it Ride online.

Where to Play Let it Ride Online

Let it Ride can be played online for money at most online casinos, as it is one of the more popular proprietary casino games in the world today. While you may occasionally find a casino that doesn’t offer it, they are the rare exception. Pay tables can vary from casino to casino, however, making some online casinos a better bet than others.

How to Play Let it Ride

An online Let it Ride hand begins with each player making three bets of equal size. It’s worth pointing out that in some online games, you may start with just one bet on the table, and have the choice to add bets rather than to remove them; this does nothing to change the strategy or concepts of Let it Ride, but is often done for legal reasons to make the game distinct from its original form.

Players are dealt a hand of three cards; the dealer will also place two community cards face down in the center of the table. The object for the player is to make the best five-card poker hand possible, using a combination of the three cards they’ve been dealt and the community cards. Players may examine their own cards, but are not supposed to share information between each other. After looking at their hand, the player now has a choice to make. They may “let it ride,” by keeping all of their bets on the table, or they may choose to remove one bet.

After each player has made their choice, the dealer will reveal the first community card. Once again, players are given the option to either let their money ride or remove another bet from the table.

Finally, the dealer will reveal the second community card. At this point, the player hands are revealed. The player needs at least a pair of tens in order to win; if they have a lesser hand, all remaining bets on the table lose. If their hand is a winner, all bets pay out according to the posted pay table. The following is the most common table:

In addition, there is a common side bet that costs $1 to play, and pays out according to the strength of the player’s hand. The following pay table is again a common one; however, if you play online Let it Ride for real money, there will often be a progressive jackpot for a royal flush. Here is an example pay chart:

The key to proper online Let it Ride strategy is knowing when to keep your money on the table (or, depending on how the game is being played, when to add money), and when to minimize your losses. Most situations are rather easy to figure out with common sense, but there are several close calls where going wrong can cost you money in the long run.

The following chart will tell you exactly when to “let it ride;” in all other instances, you should remove a bet from the table. When playing Let it Ride online for real money, keep this chart handy for quick reference:

With Three Cards, Let it Ride…

With Four Cards, Let it Ride…

Using this strategy, the house edge for Let it Ride is approximately 3.51%. This edge is the percentage of a single bet, not the entire three bets made at the beginning of each hand; if you make three bets of $100 each to start the game, the house edge is about $3.51.

In general, it’s best to avoid the side bet, as this bet usually has a house edge of well over 20%. However, some real money online Let it Ride games use a progressive jackpot that pays out for a royal flush. If this jackpot is very large, it is possible for the side bet to be a profitable bet for the player, though the jackpot would need to be extraordinarily large in order for this situation to occur.