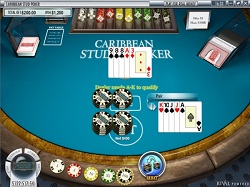 There are a lot of factors that might turn you off from playing Caribbean Stud Poker. The house edge is relatively high compared to a lot of other table games, and while there is some strategy, most of the time, your decisions will be very easy to make. However, there’s one factor that keeps players coming back to the Caribbean Stud Poker tables again and again: the massive progressive jackpots players can receive for being dealt a royal flush.

Playing Caribbean Stud Poker online can be quite lucrative, if you can find a game with a big enough jackpot to make the game worthwhile. In addition, the basic game itself is pretty fun, and can result in big payouts with reasonable odds if you use proper strategy when playing.

Most – but not all – of the major online casinos have Caribbean Stud Poker games available. Since the rules and pay tables are fairly standardized in the main portion of the game, picking a casino for Caribbean Stud comes down to choosing based on the progressive jackpots that are offered at each site.

If you’re going to regularly play Caribbean Stud Poker for money, you’ll want to look at the progressive side bet pay tables, as some are clearly better for players than others. If you’re willing to just occasionally play Caribbean Stud Poker when the jackpots become extremely large, it becomes more a matter of shopping around and keeping an eye on jackpot amounts, striking when the time is right.

How to Play Caribbean Stud Poker

In Caribbean Stud Poker, the player wants to be dealt a stronger five-card poker hand than the dealer, with standard poker hand rankings used to determine who wins each hand. At the beginning of each hand, the player must make an ante bet, and may also choose to make a progressive side bet (usually for $1).

Each player is dealt a five-card hand, face down. The dealer is also given a hand, with one card face up to give the player some information about the dealer hand. Each player can look at their hand, but shouldn’t share information with other players.

Each player must now choose to either raise or fold. If the player chooses to fold, they forfeit their cards and their ante bet. If the player wishes to raise instead, they must make a second raise bet for twice the amount of the initial ante bet. For instance, if the player makes a $10 ante bet, the raise bet would be $20.

Once all players have made their decisions, the dealer will reveal his hand. The dealer must have at least an ace-king high hand in order to qualify. If the dealer does not qualify, all players remaining in the hand win event money on their ante bet, and all raise bets push.

The progressive side bet is handled separately, and pays out entirely based on the strength of the player’s hand; the dealer’s hand is not a factor in this bet. Pay tables vary wildly, with dozens of different pay tables known to exist. Here is one example of a typical pay table you might see in real money online Caribbean Stud Poker:

Other pay tables will often give 10% of the jackpot amount for a straight flush, and some also pay small amounts to the player for a straight.

It has often been said that online Caribbean Stud Poker strategy is both quite simple and enormously complex. This isn’t really a paradox; the basics of Caribbean Stud strategy are very simple, and are enough to come very close to playing perfectly; however, the true optimal strategy is devilishly complex, and there may not be a single person in the world who has truly memorized it.

First of all, every good Caribbean Stud Poker strategy begins with two rules, which are as follows:

A more complete strategy which comes fairly close to the optimal strategy was developed over at The Wizard of Odds by Michael Shackelford. His strategy, which he calls the “Wizard’s Caribbean Stud Poker Strategy,” is as follows:

Using this strategy will result in a house edge of 5.225%, just barely higher than a perfectly optimal strategy, which comes in at 5.224%. If you want something even simpler, though, you can just raise if the dealer’s up card matches any of your cards; in that case, the house edge rises slightly to 5.33%.

As far as the progressive side bet goes, there isn’t much strategy that can be used while playing it, since it is based entirely on luck. However, it is worth taking a look at the jackpot amount before choosing whether or not to play the jackpot game. In most cases, the house edge on the progressive jackpot side bet is very large if the jackpot is tiny; however, as the jackpot meter rises, the bet becomes better and better for the player. Once the jackpot reaches a certain level – usually, somewhere over $200,000 – the bet actually becomes profitable for the player, and you’d be giving up value by not playing it!